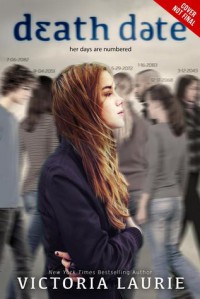 I received this book via NetGalley to give an honest review.
I have to say this is one of the best books for me as far as being a YA. It was way different than I have read before. You have a young girl named Maddie who since she was born saw numbers above people's head but never knew what they meant until later on. That is when learns they are death dates. Which I have to say is pretty cool. I think it would be neat to know when other's would be passing on or when I would be.
But anyway on to the rest of the review.
Maddie is a character that is very likable and you can feel the guilt she has when her father died even though it was not her fault. She also seems very grown up being as she has to go to school and try to take care of her mother who has turned into an alcoholic. Kind of sad I know. Not only that because of what she can see people at school bully her and I am glad that it was finally resolved but it was tough reading about Maddie being treated differently.

When Maddie gives a reading to a mother and then lets her know that something bad would be happening to her son, that is when the real trouble starts for Maddie. She is on a suspects list along with her best friend Stubby. Now Maddie has to prove with the help from her uncle who is a lawyer that she and Stubby are innocent, but will it be enough before more kids are in danger? Or will Maddie and Stubby be the ones who are convicted?
Now I would say there is romance but it is more along the lines of a big crush for Maddie but it doesn't take away from the story.

I can honestly say when I found out the who dun it part I was very very surprised because I totally didn't even see it coming and that is what I enjoyed. I like to be kept guessing until the very very end and this book did it for me.

I plan on keeping my eye on this author I like her writing style and the way she can keep you wanting to read more.