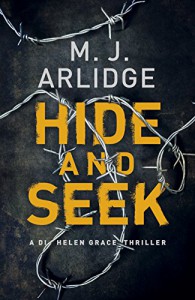 Oh man when I saw there was another Helen Grace book out I knew I would have to read it. I checked my local library and saw they had it in there and placed my reserved.
Now normally you can read a series by itself and still understand what has happened I would highly recommend you read the book before this one at least so you can know why Helen is in prison.

Two things are going on within this story. Helen is in prison and when the bodies start piling up Helen will stop at nothing to solve this mystery. She will not allow the killer to escape rather it be a prison guard or an actually inmate.
With Helen doing that her previous co-worker DI Brooks is trying to clear Helen's name. Though she is hitting a few roadblocks with her bosses.
I can honestly say I didn't think of this person would be the murderer I was almost certain I knew who it was when I got the part where I gasped. Nope I was totally wrong.
I really loved how Helen handled being in prison she wasn't one just to roll over even though she knew the odds were against her.
The way the victims were murdered was pretty crazy, but I loved how we were given detail!
I don't think this was my favorite one out of the series but I did enjoy it. Can't wait for the next one.